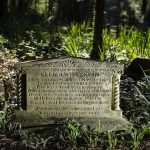 Notes: In 1880, Elijah and his wife, Mary, were living in the home of a white lawyer named Algernon S. Buford. Mary was the family's cook; Elijah is listed as "servant's husband."